Has the Campbell Soup Company switched sides on genetically modified ingredients? Not completely. 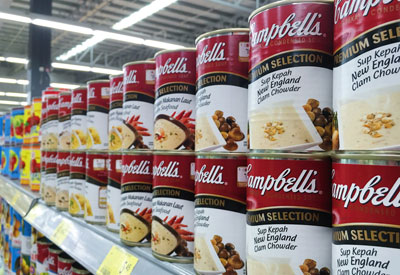 Campbell’s Soup announcement that it now supports mandatory labeling of products containing genetically modified organisms was greeted with much fanfare when it was made January 7. National Public Radio’s “The Salt,” comparing the battle over GMOs to trench warfare or World War I ran a headline that suggested Campbells had gone over to the other side. Bloomberg Business called the move “breaking ranks.” In the war over GMOs, Campbell’s suddenly appears to be a traitor.

But read further into these pieces and it’s obvious that Campbell’s decision is not a complete surrender at all. Dan Charles piece for “The Salt” explains that Campbell’s switched sides on one hotly contested question: whether the government should require labels on genetically modified ingredients in food” (emphasis ours). They still support the use of GMOs. And they support labeling only at a national level.

Some states, including Vermont, have made attempts or are in the process of requiring products containing ingredients produced from genetic modification to be labeled as such. Campbell’s announcement seems an admission that if they must label for certain states, they might as well label for all. From their announcement: “Campbell has opposed this state-by-state patchwork approach, and has worked with the GMA [Grocery Manufacturers Association] to defeat several state ballot initiatives.”

Now your fair-minded Planet Natural blogger understands that the food business might want to operate under a single consistent nation-wide labeling law, rather than patch-work labeling requirements that might vary from state to state.

On the other hand, we don’t see a nation-wide labeling law coming down the pike in the next few weeks. In fact, we see stiff resistance to it despite a fact even Campbell Soups acknowledges: 92% of consumers favor labeling products that contain GMOs. (Here’s the complete text of Campbell’s announcement.) Nor would we want a watered-down or voluntary law designed to confuse and mislead us poor consumers even more.

As to GMOs? Campbell’s remains a staunch supporter. Again from the announcement: “I want to stress that we’re in no way disputing the science behind GMOs or their safety. The overwhelming weight of scientific evidence indicates that GMOs are safe and that foods derived from crops using genetically modified seeds are not nutritionally different from other foods. ”

Some of us would want to argue the safety of GMOs, especially considering the pesticides used on them. And we’d like to bring up the other problems that the GMOs controlled by global conglomerates generate.

But yes, the Campbell’s decision to label is good as far as it goes. We can’t assume to know the reasons the company decided to pursue this path, but we think it has something to do with marketing and the fact that growing numbers of consumers are making purchase decisions based on organic, so-called “natural” foods, and which additives are or aren’t present in their products.

Maybe this is the time to push hard for a true, nation-wide labeling requirement that’s honest, detailed and monitored for truth. But it will be an uphill fight against a Congress that recently decided we don’t even deserve to know in which country the beef we buy is produced. Timely reminder: 2016 is an election year.