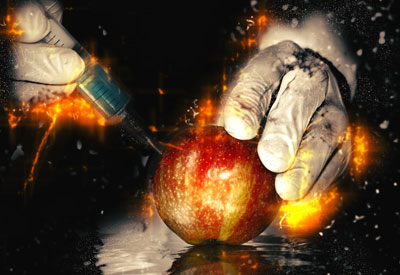 We’ve previously addressed the controversy over genetically modified apples being developed, not by Monsanto, but by a specialty Northwest grower. The apples have been engineered to resist browning and bruising, making them more suitable, it’s claimed, to being served as slices. Surprisingly, a number of established apple growers have questioned the need for the GMO varieties that are set to be marketed under the name “Arctic.”

Now the Department of Agriculture has given approval for planting of the genetically modified apple. The company behind the apple, British Columbia-based Okanagan Specialty Fruits, expects small, test-market production in 2016 and larger sales of both trees and fruit coming after that. So far, the apple is available in two strains derived from Golden Delicious and Granny Smith, Arctic Golden and Arctic Granny. Fuji and Gala GMO varieties are in the works.

The apples are being marketed as the first genetically altered food crops engineered to benefit the consumer rather than farmers, and growers. Critics are quick to point out that the apples GMO-derived non-browning attributes don’t benefit consumers as much as the middleman: the shippers and processors who package sliced apples for public consumption.

In its marketing, OSF claims that the fruit is the most tested in existence. Yet the Food and Drug Administration has not yet approved the fruit for human consumption. The Department of Agriculture’s planting approval comes just months after their approval of genetically engineered potatoes that also claim non-browning abilities.

There’s plenty of dissension about the fruit’s value, especially among growers. The New York Times reports that:

many executives in the apple industry say they worry that the biotech apples, while safe to eat, will face opposition from some consumers, possibly tainting the wholesome image of the fruit that reputedly ‘keeps the doctor away.”

Apple growers who opposed the approval of Arctic fruit said they would now have to direct resources towards informing the public that almost all apples available to them, unlike the Arctic apples, are not genetically engineered.

Gerber, maker of baby foods, and McDonald’s, the global fast-food giant, have already said they will not use the genetically modified apples.

Groups opposing GMOs, including Food & Water Watch, came out strongly against the approval. Wenonah Hauter, Food & Water Watch’s executive director said in a statement, “In its environmental assessment, the USDA glossed over the possibility of unintentional effects associated with the technology used to engineer these apples, potential economic impacts on the U.S. and international apple market, effects of potential contamination for non-GMO and organic apple growers and the impact of the non-browning gene silencing which also can weaken plant defenses and plant health.”

OSF claims that the genetic engineering done to create these apples is not the same as GMO engineering that involves genetic material completely different from that in which it’s planted. The genes that create Arctic apples come from the apples themselves. Critics contend that this relatively new technology, called RNA interference, might involve serious consequences. It also serves to hoodwink consumers into thinking product is fresh when it is not. Says Hauter, in her statement, :

Mounting evidence has shown that meddling with the genes could have unintended effects within the plant and also on organisms that eat the plant. The particular gene targeted by this technology allows the apples to be sliced without turning brown, which could mislead consumers into thinking they are eating fresh apples when they might be eating apples on the verge of rotting. Browning is an important indicator to consumers in determining the freshness of an apple or apple slice. The silenced gene is also heavily involved in a plant’s natural defense against pests and pathogens, which could lead to trees that are less healthy than non-GMO apples and rely on more chemical treatments to ward off pests and disease.

The approval gives consumers a chance to register their influence. Will the new non-browning apples catch on? Or will buyers demand to know if their apples are genetically modified and refuse to buy them? Bad sales could sink this product, government approval or not. We’ll stay tuned.

Of course, apples have been involved in other health controversies. The use of Alar on apples created a firestorm some 15 years ago. Apples, says the Environmental Working Group, carry more pesticides than any other fruit. The best thing you can do is grow or buy organic apples locally. To keep them from browning, naturally, in your child’s lunch box? A little vitamin C in the form of lemon juice. It’s a lot easier than engineering a new, possibly risky apple.