GMO Labeling Initiative I-522: Down to the Wire 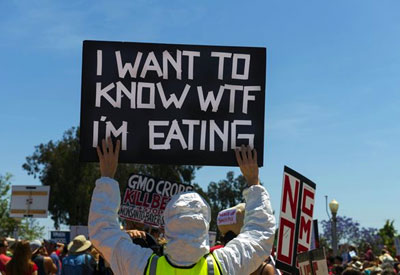 The voting is on in Washington (tomorrow is election day there) and it’s time to take a last look at I-522, the GMO labeling initiative, before the results are decided. Final results in fund raising? The No forces have raised $22 million shattering the all time record. Meanwhile, funds raised in support of the measure total $6.8 million, not a bad take in a race like this. But then look who they’re up against.

Surprisingly, not all the big corporate donors that contributed to defeat the California initiative have dumped money into Washington. Speculation is that some of the corporations who have healthy, natural product lines don’t want to be seen on the wrong side of this issue, like Lever Bros. who now owns Ben & Jerry’s ice cream.

Here’s a fine Seattle Times interview with Phil Bereano (link no longer available), professor emeritus of technical communication at the University of Washington, on why he supports I-522. He gives straight-forward rebuttals to many of the anti-labeling and pro-GMO arguments. Read it; you’ll be glad you did.

Check out Planet Natural’s Facebook page and the responses to our blog post that went up last week. Yes there’s a lot of support shown for the initiative and a certain incredulity that people would fall for obvious lies and twisted statistics that come from the same people who want to defeat the measure. We, too, are always wondering why money has so much power in American politics and can’t help but think that some of us are just too gullible (we would never think those same people are dumb — that wouldn’t be nice or appropriate for a true discussion of the issue). But money, as we do know, is very convincing when it comes to advertising, whether its television, radio, or print. We just wish they wouldn’t resort to out-and-out falsehoods. Truly relevant arguments against the initiative wouldn’t need to skirt the truth.

One of our favorite arguments — because it’s so deceptive (you’ll see it in the Facebook comments) — is that labeling isn’t necessary. All health conscious consumers have to do is buy organic products. That would be great if it were possible. Not all products, especially the processed ones, are available as strictly organic products. And because of misinformation, many consumers believe that the word “natural,” applied to so many unnatural and GMO-containing products, means that they’re organic when of course they’re not.

One argument that we’d like to see more of is the threat GMO crops pose to small and organic farmers. You don’t have to be a corporate giant to plant GMO seed. But you’d have to buy it from one. But GMO crops regularly contaminate nearby fields that aren’t growing GMO crops. The result of this contamination is even more disastrous for organic farmers. They might not only lose their crop but their certification.

It seems politicians that are so supportive of America’s small business look the other way when it comes to real issues that affect small farmers. Personally, I’m tired of polls who use small business as a feel-good prop when running for office, then stab them in the back after elections are through. Opponents keep trying to tell us that GMO crops do no harm to our health. Not true. They never address the harm they do to small business. But then, money controls the message.

As far as the latest polls go, the initiative clings to a small lead despite the dollars set against it. One theory holds that the barrage of deceptive advertising is designed to confuse people and keep them away from the polls. We hope that isn’t true. Tomorrow — today — will be an interesting one. Stay tuned.